Y’know, I’ve watched a lot of anime. That is an understatement, especially since I could have seen at least twice as many as I’ve seen by this point if I hadn’t spent so much time watching and rewatching the Monogatari series. Although I just used the past tense, this is an ongoing process. I’m in a perpetual state of rewatching Monogatari, to the point that there is very little rhyme or reason to it. For the most part, now, I just jump randomly between the various story arcs from NekoKuro on. I’m not going to call Monogatari the greatest anime of all time, but it is certainly the most special to me.

There is so much going on in Monogatari, and that is yet another understatement. Monogatari means ‘story’ in Japanese, but exactly what is this story about? A lot of things. Now I probably sound like a dumbass, with my consistently ambiguous answers. I’d say that Monogatari captures the essence of the two most prominent dilemmas that arise in the human experience: the struggle to face and deal with our problems and the struggle to be together. And also a boatload of other things, including the relative merits of little girls, proper toothbrush etiquette and, quite prominently, the art of the stupid pun. I recently finished reading the first volume of Bakemonogatari, and in the author’s note, Nisio Isin basically says that Monogatari was an excuse to make a lot of stupid puns (the one he had in mind was the tsundere/tundra pun from Hitagi Crab). It’s a testament to Monogatari’s capacity to captivate its audience that it manages to be so popular overseas, given the fact that Isin’s puns fall apart in translation, for the most part.

Instead of trying to put together a cohesive essay on what Monogatari means to me, I’m going to ramble on until I have to go to class and take this test for which I haven’t studied. That’s in 38 minutes, so let’s see what comes to mind in that period of time as I type and listen to the 1984 album “Let it Be,” by the Replacements, which has really been growing on me. As soon as I finished typing the first sentence of this paragraph, I knew exactly what direction I’d be taking my charismatic rambling. 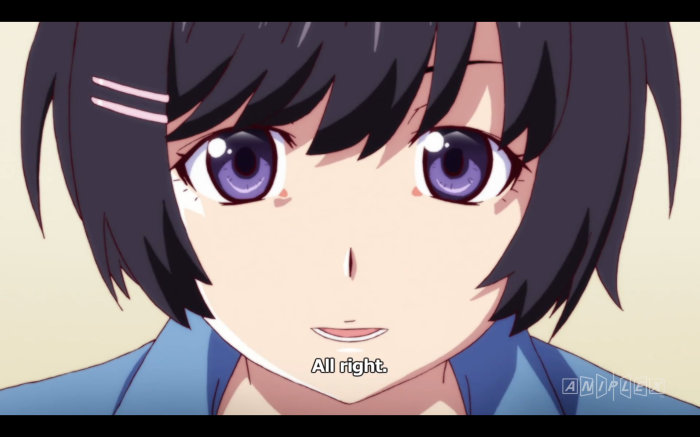 The choice I’ve made, to dedicate this time to blogging about Japanese cartoons rather than take control of the reins of my life and try to live up to my full and fantastic potential and study for this test, is precisely the sort of choice that tend to set the average Monogatari characters down the path to an apparition. If you’re not familiar with the series, Nisio Isin, the author, uses these apparitions to represent the psychological turmoil of the character they are afflicting. Almost every Monogatari arc involves a character avoiding their problems the way I am. I’m sitting here avoiding studying for this test because the task of trying to cram a month’s worth of reading into forty or so minutes is quite daunting, although I’m sure I could somehow manage to get something out of it that will help me on this essay test. 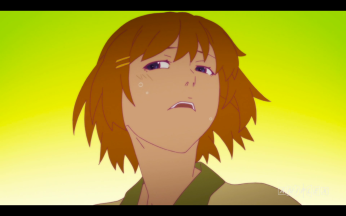 It’s actually just a quiz, and I’m sure there’s no way I’ll get under a B-. I totally BS’d my way through the first quiz and was able to pull off an A-, which surprised even me, I could probably manage to do it again. However, there’s a reason I’m sabotaging myself like this. If I do well in all my courses this semester, I’ll have to make the choice between returning to the University from which I withdrew just over a year ago on the eve before I first watched abrasive in your face panty shot that opens up the first episode of Bakemonogatari.

That was the lowest point in my life. Anime was my means of escape at the time, but Monogatari, which I was watching then for the first time, wasn’t going to let me off that easy. Instead of being able to forget about my problems with the sort of power fantasy I had been expecting, I found myself watching the most endearing cast of characters I’d ever seen be forced to face their own problems, often after doing everything in their ability to avoid them. Senjougahara avoids her feelings about her mother by repressing them, or in the literary framing of Monogatari, by dumping them upon the weight/emotion crab. 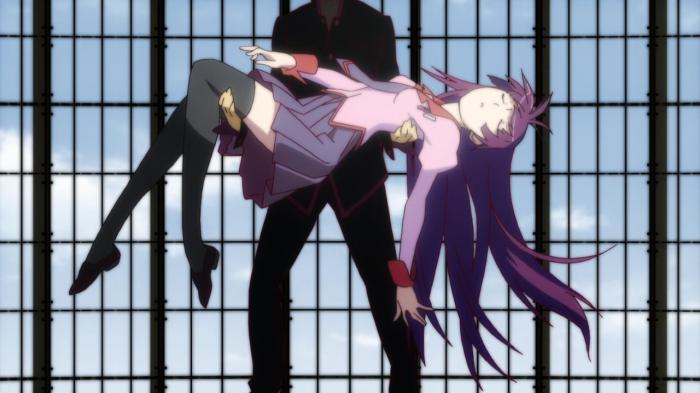 I was at the same place as Senjougahara when I first watched Monogatari, a deep depression characterized not by feeling incredible sadness, but by feeling nothing at all.  Of course I pretended not to notice the parallels between Monogatari’s characters and myself the first several times I watched the show, but that was just another example of me avoiding my problems. 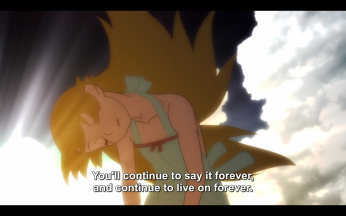 If there is a single Monogatari arc that best captures the stubborn persistence humans exhibit in avoiding their problems, it’s Tsubasa Tiger, or Nekomonogatari Shiro, which might very well be my favorite arc of the series. This arc, wow. At first glance, Monogatari seems to be a show that has ten thousand things going on at once, but I don’t think that’s quite the right way to think about it, and NekoShiro makes a pretty great case for that. There are indeed dozens of layers to Monogatari. It is packed with explorations of a variety of struggles that all people deal with. However, Nisio Isin focuses his attention on different subjects in each arc, so the show never has too many ideas flying around within the same contained story. In Nekomonogatari Shiro, the primary focus is the nature of the way humans avoid their problems. Mamaragi, in her brief exchange with Hanekawa, provides the story’s primary metaphor for the way we avoid our problems, regarding it as “averting your eyes.” Hanekawa adopts this metaphor in her subsequent reflections.

Hanekawa goes to ridiculous lengths to avert her eyes in Nekomonogatari Shiro. The key to Hanekawa’s success, thanks in no small part to Senjougahara, is that she realizes what she’s doing. Even once she has come to this realization, she still seems to subconsciously be making every effort to avert her eyes. She goes to the library (every book in which, according to the novel, she has read) for information to help her resolve the crisis she had found herself in, despite knowing very well that she won’t find anything useful. She doesn’t acknowledge the obvious implications of the fires burning down the places she’s slept until Senjougahara forces her to. She tries to get out of “playing cards” with Karen and Tsukihi as well. Its then that Hanekawa takes the next step toward facing her problems by discussing with the Fire Sisters what feelings they associate with fire.

Alright, and twenty hours (actually days) later, that quiz for my anthropology class, of course, did not happen, because, y’know the universe is ridiculously easy on me and I rarely get what I deserve. Well, actually, that’s not really the case anymore. Yeah, that quiz I didn’t have in anthropology? It was not the only thing on my plate. I also had a Philosophy paper that was due today at noon.

It was absolutely not my best work. As a matter of fact, I actually didn’t even make all the points I was supposed to make. I regret procrastinating it so much, I missed a great opportunity to make myself look cool by writing some cool shit about Substance-Attribute Ontology. I had a great analogy about the nature of substances in Descartes and Leibniz’s views and html addresses. I spent so much time avoiding getting started on this assignment. Why? And you know me, right? Writing and philosophy are like two of my favorite things. 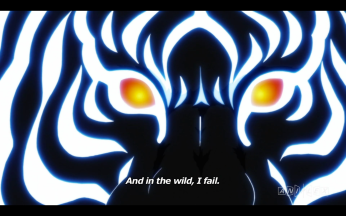 Whatever, I totally bombed that paper. Maybe if I get the opportunity to fix my mistakes I won’t actually blow it. There is only one thing standing between me and returning to the University of Notre Dame, from which I withdrew a little over a year ago. I was supposed to return in the Winter but I bombed a class that I could have aced. In fact, it was a class I actually loved, so much so that I now plan on majoring in that field, anthropology. It’s not a reflection of my Idiot blood. My Father, God rest his soul, would never have let this happen. Maybe I’m like Araragi, and I’m doing all of this as some sort of punishment because I hate myself. I don’t know. If I want to fix everything and live happily ever after and follow my dreams, that’s still possible. I can still get my shit together. I suppose what will determine whether or not that happens is me, and whether I make the judgement that I deserve to be happy. 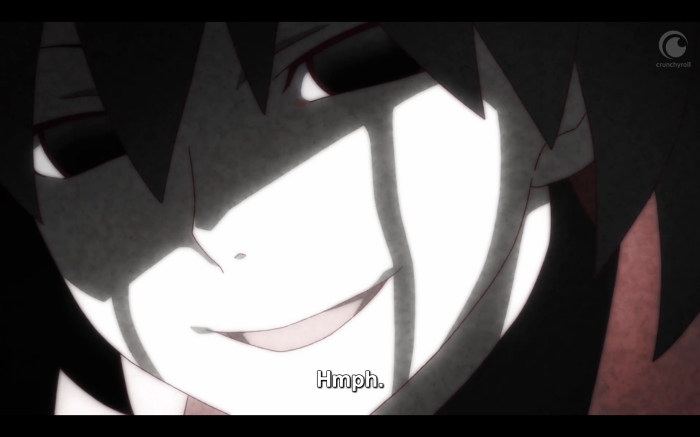